Once a year I participate in the “Swim Across America – Sound to Cove” event to raise money for the search to find a cure for cancer. Many colleagues and friends – as well as investors in Cirrus Data – have supported me enthusiastically through the years. This happens to be the 10th year I have been part of this event. I was very much looking forward to the swim. With money pouring in in support of my effort, my brother and our CEO, Wayne, was scheduled to guide me with his kayak through the 5K journey in the beautiful Long Island Sound, under the warm morning sun. Following the swim, there was to be a celebration featuring many organizations presenting their accomplishments in cancer research that were direct results of the money raised by Swim Across America.

However, on the morning of the event, the sky was behaving like a little mischievous rascal who was hell-bent on putting obstacles in the way of our team’s effort to pursue the ‘Battle of all Battles’ against cancer. A heavy downpour erupted, along with some threats of thunder, but this only solidified our determination to go on with our swim! You see, we had a secret weapon called the “Nassau County Aquatic Center” – an 80,000 square-foot facility built in 1998 for the International Goodwill Games – which features a 68-meter “stretch” 50-meter pool constructed to conceal swimmers from the sky. Take that, mother nature! 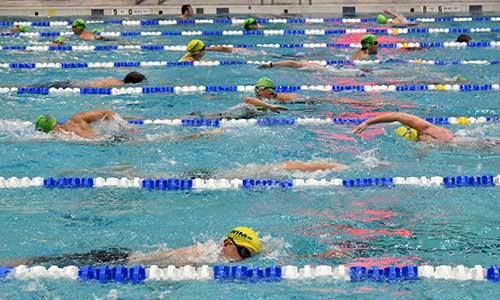 The NCAC, however, is quite a bit smaller than the Long Island Sound. Hundreds of swimmers squeezing into a limited number of lanes to swim back and forth was quite a chaotic sight. I suffered multiple bruises from hitting the lane dividers, which were made of plastic but felt harder than steel. I really wished we were swimming in the open water of the Long Island Sound. It would have been so much more fun! I didn’t even get the chance to check out if there were any sharks, or better yet, mermaids! And I had to swim back and forth for God only knows how many laps. With so many people sharing the lanes I was so busy just avoiding ramming or being rammed by others, so I totally lost count.

I do know that I swam for 2 hours, courtesy of the giant digital clock in the pool area. A week earlier I had timed myself in the 25 meter pool at the gym for 200 laps without kick start, which took me 1 hour and 50 minutes (yes, I planned ahead – you think I would be so stupid as to face the enemy without any preparation)? Based on that run, I concluded 2 hours should give me more than 5K. The embarrassingly slow speed isn’t something I’ll brag about.

By the time I got about one-third of the way through my swim, the ½ and 1 mile swimmers were gone. At last I was able to enjoy the remaining laps with a few other lonely swimmers, and completed the long journey at peace.

Despite the challenges, this year was another triumph for Swim Across America. With support from my good friends, we raised $5,447, while our team together raised over $30,000. The event itself raised over 500K!

Since its founding in 1987, Swim Across America has raised tens of millions of dollars for cancer awareness and research. Best of all, the organization releases concrete, specific reports of the achievements from the researchers it sponsors. All our supporters and those who participated should be proud of what we have done. When you hear of someone who has been cured of cancer, you can be confident knowing you did your part in contributing to his or her fortune. Yours could very well have been the dollar that did the trick.

Next year I will definitely put in an advance order with a more reliable source with a proven record of delivering good weather on time!

To all those contributed to this event, enjoy the rest of the summer. You earned it. And thank you very much again from the bottom of my heart!

Before joining Cirrus Data Solutions, Wai co-founded FalconStor Software in 2000, where he served as CTO and VP of Engineering. Wai was the chief architect, holding 18 of the 21 FalconStor patents. His inventions and innovations include many of industry’s “firsts,” in areas of advanced storage virtualization, data protection, and disaster recovery. Wai received a MSEE from UCLA, 1984, and BSEE from SUNY Stony Brook, 1982. He was honored with the Distinguished Alumni Award from Stony Brook in 2008.
Go to Top