Discover how our products have helped those in the manufacturing sector 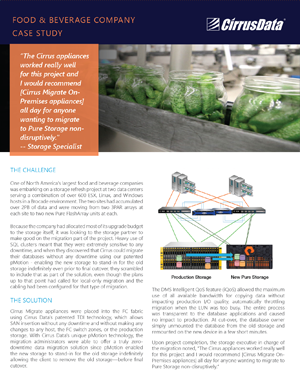 • A non-disruptive deployment for block migration

One of North America’s largest food and beverage companies was embarking on a storage refresh project at two data centers serving a combination of over 600 ESX, Linux, and Windows hosts in a Brocade environment. The two sites had accumulated over 2PB of data and were moving from two 3PAR arrays at each site to two new Pure FlashArray units at each.

Because the company had allocated most of its upgrade budget to the storage itself, it was looking to the storage partner to make good on the migration part of the project. Heavy use of SQL clusters meant that they were extremely sensitive to any downtime, and when they discovered that Cirrus could migrate their databases without any downtime using our patented pMotion – enabling the new storage to stand-in for the old storage indefinitely even prior to final cutover, they scrambled to include that as part of the solution, even though the plans up to that point had called for local-only migration and the cabling had been configured for that type of migration.

Cirrus Migrate appliances were placed into the FC fabric using Cirrus Data’s patented TDI technology, which allows SAN insertion without any downtime and without making any changes to any host, the FC switch zones, or the production storage. With Cirrus Data’s unique pMotion technology, the migration administrators were able to offer a truly zero downtime data migration solution since pMotion enabled the new storage to stand-in for the old storage indefinitely allowing the client to remove the old storage – before final cutover.

The DMS Intelligent QoS feature (iQoS) allowed the maximum use of all available bandwidth for copying data without impacting production I/O quality, automatically throttling migration when the LUN was too busy. The entire process was transparent to the database applications and caused no impact to production. At cut-over, the database owner simply unmounted the database from the old storage and remounted on the new device in a few short minutes.

Upon project completion, the storage executive in charge of the migration noted, “The Cirrus appliances worked really well for this project and I would recommend [Cirrus Migrate On-Premises appliances] all day for anyone wanting to migrate to Pure Storage non-disruptively.”