Discover how our products have helped Loyola University migrate its data 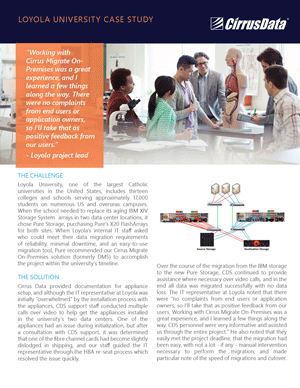 • A non-disruptive deployment for on-premises migration

• Data must be moved within a four-month timeline

• CDS works with Loyola IT staff to deploy and insert appliances

• Migration of data off old storage can be conducted during production

• Appliances were deployed successfully by Loyola IT staff

Loyola University, one of the largest Catholic universities in the United States, includes thirteen colleges and schools serving approximately 17,000 students on numerous US and overseas campuses.

When the school needed to replace its aging IBM XIV Storage System arrays in two data center locations, it chose Pure Storage, purchasing Pure’s X20 FlashArrays for both sites. When Loyola’s internal IT staff asked who could meet their data migration requirements of reliability, minimal downtime, and an easy-to-use migration tool, Pure recommended our Cirrus Migrate On-Premises solution (formerly DMS) to accomplish the project within the university’s timeline.

Cirrus Data provided documentation for appliance setup, and although the IT representative at Loyola was initially “overwhelmed” by the installation process with the appliances, CDS support staff conducted multiple calls over video to help get the appliances installed in the university’s two data centers. One of the appliances had an issue during initialization, but after a consultation with CDS support, it was determined that one of the fibre channel cards had become slightly dislodged in shipping, and our staff guided the IT representative through the HBA re-seat process which resolved the issue quickly.

Over the course of the migration from the IBM storage to the new Pure Storage, CDS continued to provide assistance where necessary over video calls, and in the end all data was migrated successfully with no data loss. The IT representative at Loyola noted that there were “no complaints from end users or application owners, so I’ll take that as positive feedback from our users. Working with Cirrus Migrate On-Premises was a great experience, and I learned a few things along the way. CDS personnel were very informative and assisted us through the entire project.” He also noted that they easily met the project deadline, that the migration had been easy, with not a lot – if any – manual intervention necessary to perform the migration, and made particular note of the speed of migrations and cutover.