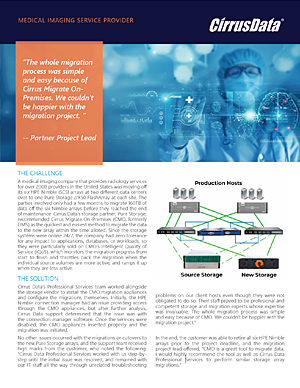 • Customer had hard deadline for removal of old storage

• Due to the nature of the customer’s business in the medical field, there was zero tolerance for downtime

• Entire project was completed on-time and within budget

A medical imaging company that provides radiology services for over 2000 providers in the United States was moving off its six HPE Nimble iSCSI arrays at two different data centers over to one Pure Storage //X50 FlashArray at each site. The parties involved only had a few months to migrate 160TB of data off the six Nimble arrays before they reached the end of maintenance. Cirrus Data’s storage partner, Pure Storage, recommended Cirrus Migrate On-Premises (CMO, formerly DMS) as the quickest and easiest method to migrate the data to the new array within the time alloted. Since the storage systems were online 24/7, the company had zero tolerance for any impact to applications, databases, or workloads, so they were particularly sold on CMO’s Intelligent Quality of Service (iQoS), which monitors the migration progress from start to finish and throttles back the migration when the individual source volumes are more active, and ramps it up when they are less active.

Cirrus Data’s Professional Services team worked alongside the storage vendor to install the CMO migration appliances and configure the migrations themselves. Initially, the HPE Nimble connection manager had an issue providing access through the CMO appliances, but after further analysis, Cirrus Data support determined that the issue was with the connection manager software. Once the services were disabled, the CMO appliances inserted properly and the migration was initiated.

No other issues occurred with the migrations or cutovers to the new Pure Storage arrays, and the support team received high marks from the customer, who noted the following: “Cirrus Data Professional Services worked with us step-by-step until the initial issue was resolved, and remained with our IT staff all the way through unrelated troubleshooting problems on our client hosts even though they were not obligated to do so. Their staff proved to be professional and competent storage and migration experts whose expertise was invaluable. The whole migration process was simple and easy because of CMO. We couldn’t be happier with the migration project.”

In the end, the customer was able to retire all six HPE Nimble arrays prior to the project deadline, and the migration project lead offered, “CMO is a great tool to migrate data. I would highly recommend the tool as well as Cirrus Data Professional Services to perform similar storage array migrations.”