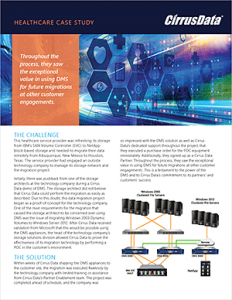 • Migration and cutover were divided into four “waves”

• Cutover of hosts were all successful on the first attempt

This healthcare service provider was refreshing its storage from IBM’s SAN Volume Controller (SVC) to NetApp block-based storage and needed to migrate their data remotely from Albuquerque, New Mexico to Houston, Texas. The service provider had engaged an outside technology company to manage its storage network and the migration project.

Within weeks of Cirrus Data shipping the DMS appliances to the customer site, the migration was executed flawlessly by the technology company with limited training or assistance from Cirrus Data’s Partner Enablement team. The project was completed ahead of schedule, and the company was so impressed with the DMS solution as well as Cirrus Data’s dedicated support throughout the project that they executed a purchase order for the POC equipment immediately. Additionally, they signed up as a Cirrus Data Partner. Throughout the process, they saw the exceptional value in using DMS for future migrations at other customer engagements. This is a testament to the power of the DMS and to Cirrus Data’s commitment to its partners’ and customers’ success.