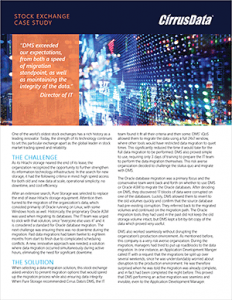 • End of lease on existing Hitachi storage, the migration needed to be quick to avoid costly fees to extend the lease

• Risk averse organization, not easy to convince to try something new

• Required a simple migration tool, enabling the 4-person IT team to perform the migration on their own

• Increased ROI by performing the data migration themselves, utilizing 4 IT professionals: 2 at the Primary Site and 2 at the Disaster Recovery Site

• DMS simplified the project significantly with their iQoS and automatic bit-by-bit comparison of the data, alleviating the painstaking task of validating the data

• DMS worked seamlessly, with zero impact to the production environment

• Largest gain was the speed of the migration, what took 12-18 months in the past only took 3 months with DMS

• 4x improvement in transfer rates when compared to Oracle ASM

One of the world’s oldest stock exchanges has a rich history as a leading innovator. Today, the strength of its technology continues to set this particular exchange apart as the global leader in stock market trading speed and reliability.

As its Hitachi storage neared the end of its lease, the organization recognized the opportunity to further strengthen its information technology infrastructure. In the search for new storage, it had the following criteria in mind: high speed access for both old and new data at scale, operational simplicity, no downtime, and cost efficiency.

After an extensive search, Pure Storage was selected to replace the end of lease Hitachi storage equipment. Attention then turned to the migration of the organization’s data, which consisted primarily of Oracle running on Linux, with some Windows hosts as well. Historically, the proprietary Oracle ASM was used when migrating its databases. The IT team was urged to stick with that solution, since “everyone else uses it” and it is considered a standard for Oracle database migration. The next challenge was ensuring there was no downtime during the migration. Past data migrations had taken twelve to eighteen months from start to finish due to complicated scheduling conflicts. A new, innovative approach was needed; a solution where data migration occurred simultaneously during active hours, eliminating the need for significant downtime.

When selecting a data migration solution, this stock exchange asked vendors to present migration options that would speed up the migration process while also ensuring data integrity. When Pure Storage recommended Cirrus Data’s DMS, the IT team found it fit all their criteria and then some. DMS’ iQoS allowed them to migrate the data using a full 24×7 window, where other tools would have restricted data migration to quiet times. This significantly reduced the time it would take for the full data migration to be performed. DMS also proved simpleto use, requiring only 3 days of training to prepare the IT team to perform the data migration themselves. This risk averse organization decided to challenge the status quo and migrate with DMS.

The Oracle database migration was a primary focus and the conservative team went back and forth on whether to use DMS or Oracle ASM to migrate the Oracle databases. After deciding on DMS, they discovered 17 blocks of data were corrupted on one of the databases. Luckily, DMS allowed them to revert to the old volumes quickly and confirm that the source database had pre-existing corruption. They referred back to the migrated volumes and continued on the migration path. The Oracle migration tools they had used in the past did not keep the old storage volume intact, but DMS kept a bit-by-bit copy of the data which proved very useful.

DMS also worked seamlessly without disrupting the organization’s production environment. As mentioned before, this company is a very risk averse organization. During the migration, managers had tried to put up roadblocks to the data migration. In one instance, an Application Development Manger called IT with a request that the migrations be split up over several weekends, since he was understandably worried about disruption to the production environment. He was therefore surprised when he was told the migration was already complete, and in fact had been completed the night before. This proved that DMS performing an active migration was seamless and invisible, even to the Application Development Manager.

The stock exchange reported the biggest gain from using DMS was the speed of the migration. They saw a 4x improvement in transfer rates over migrations using Oracle ASM, and thanks to DMS’ simplicity, they were still able to perform the data migration themselves. The bit-by-bit comparison of the data allowed them to copy data without having perform validation of the data at the same time; DMS automatically did it all. Last but certainly not least, the migration was able to be scheduled while activity was ongoing, alleviating long downtimes and scheduling conflicts and turning a 12-18-month project into a 3-month project.