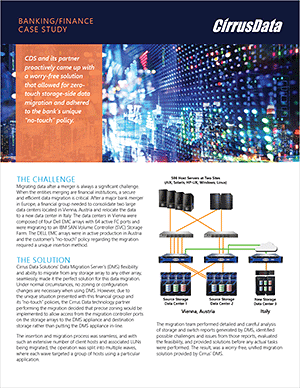 • Large number of client hosts (over 500) in a large enterprise environment running diverse mix of OS’, including different versions of AIX

• Data center relocation is from one country to another

• DMS storage-side insertion on the array’s dedicated migration ports met the “no-touch” requirement, with no impact to existing paths

• Remarkable performance was achieved — over 500Mbytes/sec with just a single gigabit link, due to a 5:1 compression ratio

The financial group represented here had recently completed a major bank merger in Europe. DMS was brought in to consolidate two large data centers in Vienna, Austria to a new data center in Italy. Four EMC arrays with 64 active FC ports were in active production in Austria, and since the customer had a unique “no-touch” policy in regard to the migration, a unique insertion approach was decided upon where the free storage controller ports normally used for migration purposes would be used for DMS insertion.

Under normal circumstances, no zoning or configuration changes are necessary when using DMS. However, due to the unique situation presented with this financial group and their no-touch policies, the Cirrus Data technology partner performing the migration decided that precise zoning would be implemented to allow access from the migration controller ports on the storage arrays to the DMS and destination storage rather than putting the DMS in-line.

The insertion and migration process was seamless, and with such a huge number of client hosts and associated LUNs being migrated, the operation was split into multiple waves, where each wave targeted a group of hosts using a particular application.

The migration team performed detailed and careful analysis of storage and switch reports generated by the DMS, identified possible challenges and issues from those reports, and was able to evaluate the feasibility and provide solutions before any actual tasks were performed.