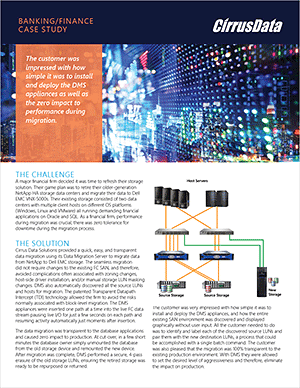 • Migrate large amount of data at each of the two sites

• Production environment runs 24/7 with no downtime planned until weeks after insertion, but migration needs to start immediately

• Approval for any changes to host, switch or source storage very difficult to obtain

• DMS appliances were deployed for migration without any changes to the environment, without downtime, and while applications were running

• DMS automated the data migration without any WWPN, switch or storage LUN information being entered, and mapped the entire SAN

• No user reports of any impact to performance throughout the migration

• Migration of both sites (large amount of data) took nearly 120 hours to complete, with no reported impact to database operations

• Final cut-over to new storage was smooth and quick

• Total number of PS hours to deploy and configure DMS for migration: 41 minutes (and no changes made to existing SAN environment)

The financial firm represented here had two data centers, both with the need to retire older-generation NetApp HA storage, to be replaced with new EMC VNX-5000’s. Since the environment contained multiple client hosts on different OS platforms (Windows, Linux and VMware) running demanding financial applications on Oracle and SQL, host-side copying of data to the new storage was deemed impossible due to the amount of downtime that would have been required.

The Cirrus Data Solutions DMS was brought in to provide live migration of the data from NetApp to EMC storage without requiring any changes to the existing FC SAN, thereby avoiding any zoning changes, host-side driver installation, or storage LUN masking changes. Using TDI technology, the DMS was inserted one path at a time into the live FC data stream, and avoided the risks usually associated with block-level migration. Live I/O was paused for just a few seconds on each path, and activity resumed automatically moments after insertion. The DMS then automatically discovered all the source LUNs and hosts for migration.

The entire process was transparent to the database applications and caused no impact to production. At cut-over, the database owner simply unmounted the database from the old storage and remounted on the new device in a few short minutes.

The DMS then performed a secure, 4-pass erasure to the old storage LUNs, ensuring that the retired storage could be re-purposed or returned.

The customer was very impressed with how simple it was to deploy the DMS appliances, and how the entire existing SAN environment was discovered and displayed graphically with no user input. All the customer needed to do was to identify and label each of the discovered source LUNs and pair them with the new destination LUNs, a process that could be accomplished with a single batch command. Given the ability to throttle the DMS migration process based on measured impact to production traffic, the customer was also able to set the desired level of aggressiveness so that throughout the entire migration project, the database owners were not aware of any performance impact to their systems.