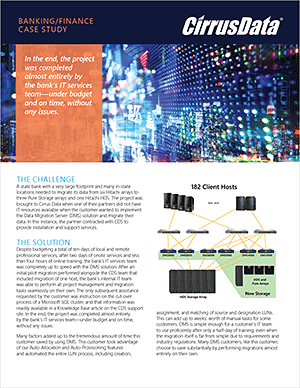 The Challenge
A state bank with a very large footprint and many in-state locations needed to migrate its data from six Hitachi arrays to three Pure Storage arrays and one Hitachi HDS. The project was brought to Cirrus Data when one of their partners did not have IT resources available when the customer wanted to implement the Data Migration Server (DMS) solution and migrate their data. In this instance, the partner contracted with CDS to provide installation and support services.

The Solution
Despite budgeting a total of ten days of local and remote professional services, after two days of onsite services and less than four hours of online training, the bank’s IT services team was completely up to speed with the DMS solution. After an initial pilot migration performed alongside the CDS team that included migration of one host, the bank’s internal IT team was able to perform all project management and migration tasks seamlessly on their own. The only subsequent assistance requested by the customer was instruction on the cut-over process of a Microsoft SQL cluster, and that information was readily available in a Knowledge Base article on the CDS support site.

In the end, the project was completed almost entirely by the bank’s IT services team – under budget and on time, without any issues.

Many factors added up to the tremendous amount of time this customer saved by using DMS. This customer took advantage of our Auto-Allocation and Auto-Provisioning features and automated the entire LUN process, including creation, assignment, and matching of source and designation LUNs. This can add up to weeks’ worth of manual tasks for some customers. DMS is simple enough for a customer’s IT team to use proficiently after only a half-day of training, even when the migration itself is far from simple due to requirements and industry regulations. Many DMS customers, like this customer, choose to save substantially by performing migrations almost entirely on their own.

In the end, the project was completed almost entirely by the bank’s IT services team—under budget and on time, without any issues.

Back To Financial Case Studies
Contact Us for a Demo!
Go to Top