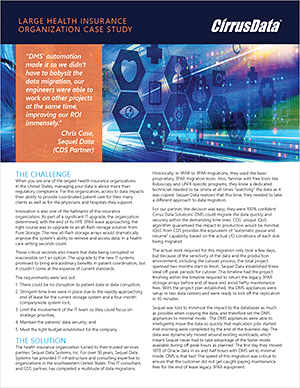 The Challenge
When you are one of the largest health insurance organizations in the United States, managing your data is about more than regulatory compliance. For this organization, access to data impacts their ability to provide coordinated patient care for their many clients as well as for the physicians and hospitals they support.

Innovation is also one of the hallmarks of this insurance organization. As part of a significant IT upgrade, the organization determined, with the end of its HPE 3PAR lease approaching, the right course was to upgrade to an all-flash storage solution from Pure Storage. The new all-flash storage arrays would dramatically improve the system’s ability to retrieve and access data. In a health care setting seconds count.

Those critical seconds also meant that data being corrupted or inaccessible isn’t an option. The upgrade to the new IT systems promised to bring extraordinary benefits in patient coordination, but it couldn’t come at the expense of current standards.

The requirements were laid out:

Historically, in 3PAR to 3PAR migrations, they used the basic proprietary 3PAR migration tools. Also, familiar with free tools like Robocopy and UNIX-specific programs, they knew a dedicated technician needed to be onsite at all times “watching” the data as it was copied. Sequel Data realized that this time, they needed to take a different approach to data migration.

For our partner, the decision was easy, they were 100% confident Cirrus Data Solutions’ DMS could migrate the data quickly and securely within the demanding time lines. CDS’ unique iQoS algorithm guaranteed the impact to production would be minimal. iQoS from CDS provides the equivalent of “automatic pause and resume” capability, based on the actual I/O conditions of each disk being migrated.

The actual work required for this migration only took a few days, but because of the sensitivity of the data and the production environment, including the cutover process, the total project spanned two months start to finish. Sequel Data established three ideal off-peak periods for cutover. This timeline had the project finishing within the timeline required to return the legacy 3PAR storage arrays before end of lease and avoid hefty maintenance fees. With the project plan established, the DMS appliances were setup in two data centers and were ready to kick off the replication in 45 minutes.

Sequel was told to minimize the impact to the databases as much as possible when copying the data, and therefore set the DMS appliances to minimal mode. The DMS appliances were able to intelligently move the data so quickly that replication jobs started mid-morning were completed by the end of the business day. The data was dynamically moved around existing workloads, which meant Sequel never had to take advantage of the faster mode available during off-peak hours as planned. The first day they moved 10TB of Oracle data in six and half hours with DMS set to minimal mode. DMS is that fast! The speed of this migration was critical to ensure that the customer did not get caught paying maintenance fees for the end of lease legacy 3PAR equipment.

“DMS’ automation made it so we didn’t have to babysit the data migration, our engineers were able to work on other projects at the same time, improving our ROI immensely.”
– Chris Case, Sequel Data Systems (CDS Partner)

In the past when Sequel had used “free tools” to migrate this organization’s data, the budget had to include a dedicated Sequel engineer onsite to monitor the data as it was copied. This wasn’t the situation for this data migration using the security enhancements that are built into DMS. Sequel didn’t have to be onsite until the cutover dates. Both Sequel and the health care organization had 100% confidence that DMS was copying the data correctly without someone being onsite to watch over it. This not only accelerated the migration and enhanced the project’s return on investment, but also helped Sequel balance multiple priorities with free engineering resources. This is a great advantage for CDS partners and provides additional budget relief in costly storage projects.

Sequel sought the expertise of the CDS professional services team throughout the migration. Sequel found that any time they required assistance, CDS’ professional services proved very helpful, especially during cut-over. When Sequel ran into a problem during one of the cut-over days, it took less than 10 minutes before they were actively working with the CDS team to search out and find a solution to the problem. CDS worked hand in hand with Sequel during the migration, making themselves always available and ready to help when needed. This partnership contributed greatly to the success of the data migration.

Back To Healthcare Case Studies
Contact Us for a Demo!
Go to Top