Discover how our products have helped those in the retail sector 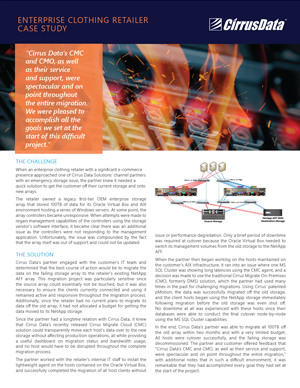 • No budget initially allocated to this unexpected storage failure

When an enterprise clothing retailer with a significant e-commerce presence approached one of Cirrus Data Solutions’ channel partners with an emergency storage issue, the partner knew it needed a quick solution to get the customer off their current storage and onto new arrays.

The retailer owned a legacy first-tier OEM enterprise storage array that stored 100TB of data for its Oracle Virtual Box and AIX environment hosting a series of Windows servers. At some point, the array controllers became unresponsive. When attempts were made to regain management capabilities of the controllers using the storage vendor’s software interface, it became clear there was an additional issue as the controllers were not responding to the management application. Unfortunately, the issue was compounded by the fact that the array itself was out of support and could not be updated.

Cirrus Data’s partner engaged with the customer’s IT team and determined that the best course of action would be to migrate the data on the failing storage array to the retailer’s existing NetApp AFF array. This migration project was particularly sensitive since the source array could essentially not be touched, but it was also necessary to ensure the clients currently connected and using it remained active and responsive throughout the migration process. Additionally, since the retailer had no current plans to migrate its data off the old array, it had not allocated a budget for getting the data moved to its NetApp storage.

Since the partner had a longtime relation with Cirrus Data, it knew that Cirrus Data’s recently released Cirrus Migrate Cloud (CMC) solution could transparently move each host’s data over to the new storage without affecting production operations, all while providing a useful dashboard on migration status and bandwidth usage, and no host would have to be disrupted throughout the complete migration process.

The partner worked with the retailer’s internal IT staff to install the lightweight agent on the hosts contained on the Oracle Virtual Box, and successfully completed the migration of all host clients without issue or performance degradation. Only a brief period of downtime was required at cutover because the Oracle Virtual Box needed to switch its management volumes from the old storage to the NetApp AFF.

When the partner then began working on the hosts maintained on the customer’s AIX infrastructure, it ran into an issue where one MS SQL Cluster was showing long latencies using the CMC agent, and a decision was made to use the traditional Cirrus Migrate On-Premises (CMO, formerly DMS) solution, which the partner had used many times in the past for challenging migrations. Using Cirrus’ patented pMotion, the data was successfully migrated off the old storage, and the client hosts began using the NetApp storage immediately following migration before the old storage was even shut off. No downtime at all was experienced with these hosts since their databases were able to conduct the final cutover node-by-node using the MS SQL Cluster capabilities.

In the end, Cirrus Data’s partner was able to migrate all 100TB off the old array within two months and with a very limited budget. All hosts were cutover successfully, and the failing storage was decommissioned. The partner and customer offered feedback that “Cirrus Data’s CMC and CMO, as well as their service and support, were spectacular and on point throughout the entire migration,” with additional notes that in such a difficult environment, it was remarkable that they had accomplished every goal they had set at the start of the project.